When we heard about the death of baby Ji-Ling at Dolphin Marine Magic last October, the news brought us great sadness. While many organizations with business plans similar to Dolphin Marine Magic vehemently claim that the animals they keep in captivity are well cared for and healthy, the unsettling news about Ji-Ling’s death and the lack of information and secrecy that still surrounds it gives major cause for concern. News like this breaks in the media every so often (just two days ago another article about the passing of a Commerson’s dolphin at Sea World), and it never ceases to affect us.

Our goal at Vivamar is to research these intelligent and unique creatures in order to protect them and their future generations. We usually focus on the protection of wild dolphin populations, but on an occasion such as this one, we’d like to take the opportunity to remind people that the lives of captive dolphins are just as important as those in the wild. Removing dolphins from the natural environment that they have evolved in and placing them in man-made structures and pools can have serious repercussions for the health and wellbeing of dolphins. In the worst case (and not altogether infrequent) scenario such as Ji-Ling’s, this disruption of their natural domain leads to death. Ji-Ling died just a few weeks before his second birthday.

During our research patrols, we are able to identify individuals in our population in the Adriatic Sea. One of our female individuals, Cvetka, has a young calf who we have affectionately named Ji-Ling so that the memory of the captive calf can live on in the spirit of a wild dolphin. Our Ji-Ling will continue to grow and develop by interacting and learning from his mother, other group members, and his natural environment that includes thousands of species of fish, sea turtles, whales and other marine mega-fauna. Ji-Ling has many adventures to go on, things to learn and experience, and challenges to overcome. 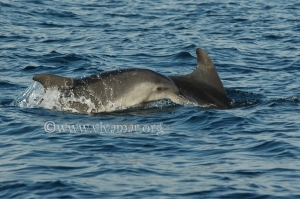 Our Ji-Ling swimming next to his mother in the open ocean.

Dolphins are already facing multiple serious threats due to anthropogenic pressures such as culling, over-fishing, net entanglements, and pollutants in the water. Organizations around the globe and our own Vivamar Society for the Sea work hard to keep dolphins out of captivity by fighting for each dolphin’s security in living a free, healthy, and long life.