Vivamar Society has just recently successfully introduced the first long-term study about the bottlenose dolphins (Tursiops truncatus) off west coast off Istria, North-Eastern Adriatic, at the conference “The American Cetacean Society” in California.
The study reveals the abundance and distribution of the last resident marine mammals in the area, since 2001 (data for Istria collected as of 2003).

A popular article was released also in the journal ‘Glas Istre’ on the 19th of Deceber 2016.

December is a month of Generosity. You are still very welcome to donate for the creation of the Dolphin Education Centre.
Each small contribution counts!

Thank you in the name of Dolphins! Vivamar team 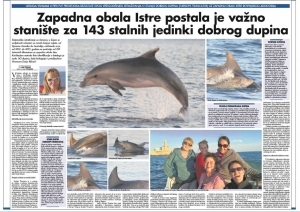 About the Author: Darja