Dolphins hunt, survey surroundings, avoid predators, and navigate in murky or dark waters using echolocation. Echolocation consists of clicks, squeaks, creaks, buzzes, and whistles produced as air is pushed past the dorsal bursa of a dolphin’s nasal region. All of these sounds are characterized by high-frequency sound waves. Dolphins, other odontocetes, and many species of bats produce these sound waves and then receive and interpret the resulting echo which is formed when the sound waves come into contact with an object. In dolphins, the main area of sound reception is in specialized lipid structures of the jaw-bone. Characteristics of the outgoing and incoming information are integrated to give the animals an accurate representation of an object’s location, shape, density, and velocity.

Dolphins can also communicate using high-frequency sounds by a complex system of whistles and squeaks. The highest frequencies (between 40 and 150 kHz) are used mostly for processes listed above, but vocalizations ranging from .2 and 50 kHz are used in social communication and interaction. Dolphins have their own unique signature whistles (5 to 20 kHZ) with newborns acquiring their own around 1 month of age. Signature whistles can be used to identify each other and maintain group cohesion. Schools of dolphins might come to aid an injured dolphin when hearing calls and help it, keeping it at the surface so it can breathe. Many times from Vivamar’s obervation there is a single animal seen, the so called ‘scout’ that is inspecting/searching for food. Such animals are often in acoustic connection with their conspecifics, and if they find food may call other group members to join in feeding. 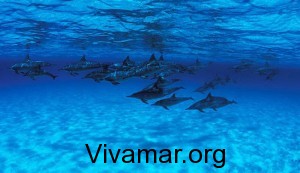 Dolphins in general are long lived animals. Bottlenose dolphins have a lifespan that can exceed over 50 years for females and up to 45 years for males. They are a very social species and often travel in groups called pods that differ in size, varying on average from 2 to 15 individuals. In the northern most Adriatic sea, we notice groups comprised of just two animals, but the average for Slovenia is 8,4 animals (Vivamar observation). Offshore groups might have up to several hundred individuals. Along the west coast of Istria (Croatia), we consistently observe bigger groups with a mean of 12,4 animals. In general, smaller groups of dolphins will further aggregate to much larger groups. These aggregations are often connected to the seasonal availability of prey and conspecific cooperation in activities regarding the prey sources. Populations can travel long distances in search of prey.

Mating occurs throughout the year but can be seen slightly more frequently in the spring and the fall. Females in the Adriatic become sexually mature at 7-12 years of age (Jagar, 2005), while males are mature at 9-14 years. Research investigating sexual maturity for bottlenose dolphins outside of the Adriatic Sea states the female sexual maturity is between 7-11 years (Cockroft and Ross, 1990). Sexually mature males tend to establish hierarchies and fight intensely over females.

The peak of sexual activity of the bottlenose dolphin in the Adriatic is from the end of March until May. In the field, Vivamar has observed fights which at first glance might seem like an interesting activity but are in fact a serious positioning within a dolphin society.

A serious fight between bottlenose dolphins in the research area.

After a fight, a male will show preference for a female. The dolphins will form a short term male-female pair that remains for a prolonged period of time. The male will initiate mating by posturing in front of the female and stroking and rubbing her. Jaw clapping, and yelping are also part of pre-copulatory behavior. Courtship can be quite violent and penetration rapid, lasting about 10 seconds but may be repeated. It takes place underwater belly to belly when the female rolls over and presents her ventral side to the male. 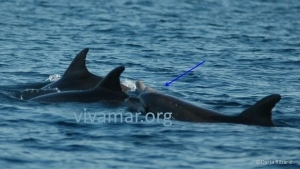 A baby dolphin swimming next to its mother.

In European waters, offspring are born in early to midsummer. Pregnancy (gestation) lasts 12 months (Cockroft and Ross, 1990). Newborns are 98-120 cm long and weight 9-11kg. Vivamar observes newborn calves annually from May onward.
The interval between calves is normally 2-6 years but can be earlier if the first calf dies. Even 45 year old females have been known to give birth!

A newborn calf will typically begin nursing from nipples concealed within a mother’s abdominal mammary slits within 6 hours of being born. Nursing (lactation) of the calf lasts 12-18 months but they sometimes begin to eat solid food at only 6 months old. The newborn calves are darker than adults and have characteristic vertical lines along their bodies, called fetal folds, that they acquire while developing in their mother’s womb. Because the calves’ bodies are still developing and are therefore weaker than their mother’s, they often spend much of the time swimming in the hydrodynamic slip stream of their mother (like a wake behind a boat, but underwater). After the first few days of birth, a mother will whistle (see echolocation, below) constantly to help the calf learn to identify her. 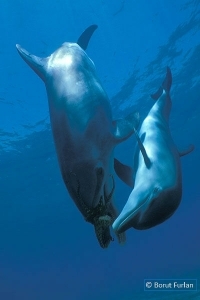 Olin teaching her 6 month old daughter how to get used to catching and eating solid food, in this case- octopus.. ©Borut Furlan

The mother and calf have a very strong bond and remain closely associated until the young is 4 or even 6 years old. Females have been seen holding stillborn or otherwise dead offspring at the surface and swimming with it, placing it onto the back before its dorsal fin for several days before letting it go (here is another case from the Adriatic, in Croatian language).

Other females can also play an important role, and they are usually in close relation to the mother dolphin. Such females, often a grandmother, help a mother dolphin in caring for the young offspring. This is especially true in the early lifetime of the calf. When a mother dives into deep waters for food, she can leave her young at the surface in care of the female that she trusts. This prolonged period of interaction during the dependent and developmental phases allows plenty of opportunity for a young dolphin’s social learning to occur.