What we stand for: 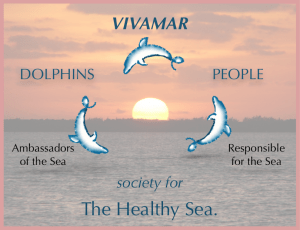 The Vivamar Society for Sustainable Development of the Sea was founded on June 5th, 2001 on World’s Environmental Day with the goal to research and protect the bottlenose dolphins of the Adriatic Sea. They are the last constantly present species of dolphin in the Adriatic, which leaves them as one of the few cetaceans in the area responsible for indicating the Sea’s health and ecological status. The Adriatic Sea is home to a vast array of marine life including microorganisms, fish, sharks and other marine megafauna, sea turtles, plants and algae, and the list goes on. Its features are unique, providing a home for thousands of species endemic to the area to thrive in an interconnected network that follows patterns guided by forces of nature. For hundreds of thousands of years, species have evolved under conditions determined by energy from the sun, sweeping currents and countercurrents, inter and intraspecific competition, mutualism, commensalism, tides governed by the moon, the shifting of entire plates and eruptions of landforms…

Until the last few hundred years the Adriatic Sea has been shaped only by the laws of nature; its health relies on a delicate balance between forces of nature and all of the living systems within it. Lately, the Sea has a new force to be reckoned with: humans. Our hastily constructed materialistic lifestyle comes at a cost far greater than money. Fortunately, many of us are realizing that a lot of what we have isn’t worth polluting and poisoning our natural resources. This is why our bottlenose dolphins, our Ambassadors of the Sea, are so important to us. They remind us that even though we are only related through a distant relative who roamed the Earth 60 to 65 million years ago, we are still the same. We are all life, we are all here together, and we are all equally dependent on the Earth’s resources. And when species start dying out, like the Risso’s dolphin and the Common dolphin, who were lost from the Adriatic Sea within the last few decades, and the bottlenose population has declined by more than 50% in the last fifty years, we know its time to start listening more closely to our ambassadors and ourselves.

It’s time to start asking what we can do as a community to rebuild a connection and trust with the environment.

At Vivamar, that starts with dolphins.

is to conserve and protect dolphins by first informing ourselves. Our team works together with volunteers from around the world to collect data about individual dolphins and their relationships, group sizes and their dynamics, and how and where they are interacting with other species and their environment. By collecting data and analyzing it year after year, we are able to pick up on patterns that when compared to other scientific data such as ocean temperatures and salinity, fish availability, animal migrations, and changes in weather, reveal a map of a much larger scale indicating how so many species interact with and depend on each other. This map rarely gives us a straight answer of exactly which event causes exactly what effect. We’ve learned that nature is much more complicated than that, because in such a dynamic and complex network, there is hardly ever just one effect resulting from one action. This makes the comparison of information all the more important. Vivamar’s activities are focused on understanding all of these factors that influence our local dolphin population, and preserving the marine environment to benefit all marine zoo-biota for many generations to come. 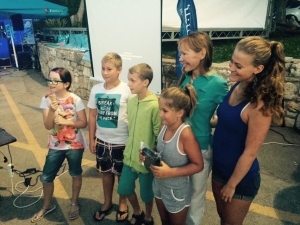 Proper education and knowledge is critical for the sustainable development of the sea. The next aspect of our mission is to use our knowledge to motivate people near and far to actively cooperate and contribute to the noble task of protecting the Sea. We are accomplishing this mission by using our scientific findings to create an interdisciplinary, widespread and well connected network of relevant players. We do this by reaching out to the broader public and a variety of professionals involved in marine research, government and fishing regulations, animal rights, educators, and the list goes on. On summer days, you can find us by the Sea giving interactive presentations and workshops about our resident dolphins to children and other locals. 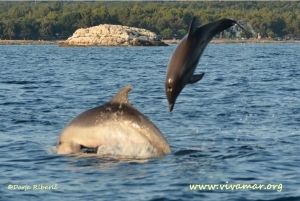 Our research extends from the area of the Slovenian sea (Slovenia), Trieste Gulf (Italy) and off West Istria (Croatia) in the northern most Adriatic Sea. The areas are contiguous and part of three different states. Our photo identification, the first of its kind for this part of the Adriatic Sea, indicates that dolphins are unperturbed by border patrol and frequent whichever waters they need in order to survive various ecological and anthropogenic pressures. Having the same animals in different countries points to the fact that this flagship species is an “Ambassador” of the same marine area, ‘uniting’ different states. When we disrupt the balance of the Sea in one area, it invariably disrupts the balance of surrounding areas as well, setting off a cascade of pressures that species must adapt to, or else perish.

The bottlenose dolphin population in the Adriatic Sea has declined by roughly 50% and is estimated to further decrease. While killings are not permitted anymore, the population is estimated to fall due to rising and different anthropogenic pressures, especially overfishing. The IUCN Red list of threatened species lists bottlenose dolphins for the Mediterranean subpopulation as vulnerable, while they may already have endangered status in the Adriatic. To learn more about our dolphins and the challenges we can help them overcome, our methods of research, and other fun marine mammal facts, feel free to navigate the pages on our website! If you are inspired to help us in our endeavor to protect these spectacular animals and their home, we would love to have you join us as a volunteer in our boat on the Sea.