Dolphin research in Istria and Slovenia

When we first wanted to learn more about the local common bottlenose dolphin (Tursiops truncatus) population in Slovenia back in 2001, we started our research by distributing a simple questionnaire to people active at sea and by carrying out occasional dedicated observation within the frame of the Slovene Natural History Museum. Only a year later, after the establishment of Vivamar Society, the surveys were strengthened and gradually distributed to our neighbors in Croatia and most of the surrounding area of the Gulf of Trieste.

Finally in 2017 the first baseline study was published, through the Cambridge University Press, in the Journal of the Marine Biological Association of the United Kingdom with the title:

The study is quite relevant as it is part of the NATURA 2000. It is the only NATURA 2000 site in Croatia, dedicated to the marine mammals. The official web site says that data here are deficient, therefore this study might, hopefully, help to the officials to do the relevant management steps for this local bottlenose dolphin population. 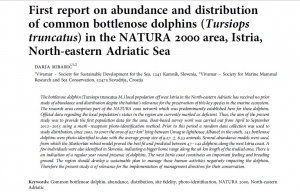 To access the full pdf text you can visit here>> 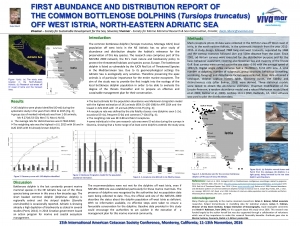 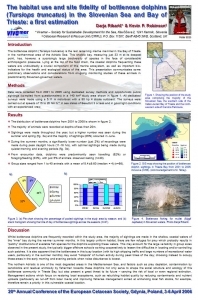 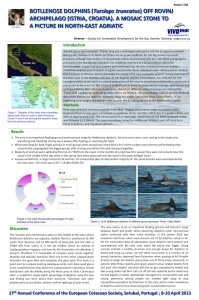 Since our simple start with only surveys, our methods for data collection have become more robust. The method for bottlenose dolphin observation at sea is carried out throughout all seasons of the year with an experienced crew and in favorable weather conditions, i.e. when the wind does not exceed 3 Bf and the visibility is fairly good. The research takes place on a motor boat, and with an appropriate arrangement of the crew, a systematic navigation of the research area is carried out so that we can monitor the sea surface as accurately as possible. Traveling occurs at a speed of up to 15 NM/h while occasionally stopping to thoroughly check for dolphins with binoculars. When we spot dolphins, we record the exact location and the code of conduct. We respect all rules and guidelines of observing dolphins in the field to ensure that animals can stay in a low state of vigilance and remain undisturbed to proceed with their activities and natural behavior. All possible quantitative and qualitative data are thoroughly collected and recorded for the duration of the encounter, which usually lasts from half an hour to two or more hours. The group structure is assessed with notes on whether or not a bigger group is divided into subgroups. We take photographs of the group and individuals, using a specific method of photo identification for concentrating on an emphasized focal animal.

Each day, the following data are collected:

Time of the day, Weather conditions, Position of the focal animal, Presence of other vessels, Number of individuals, Presence of offspring, Time and length of the observation, Time interval of diving, and  Behavioral pattern of the group and individuals.

Bottlenose dolphins can be encountered fairly close to land and up to more than 4 km from the coast, with the average depth being about 30m. We namely deal with the coastal ecotype of the bottlenose dolphins (for more see here). Due to intense marine traffic during the tourist season, there is evidence of a larger dispersion of dolphins into smaller subgroups. We observe new offspring each year, indicating a healthy structure of the subpopulation and therefore a habitat offering relatively favorable conditions. Nevertheless, despite all the years of research, we still can not state the trend of the local subpopulation with certainty, ie. whether it is declining or rising, although the curve with the data on newly identified dolphins is growing. We have about 100 individuals listed in the catalog; a certain caution is necessary in stating whether the newly identified dolphins are indeed resident in the local area or perhaps only individuals using the research area as part of a migration route from south to north and vice versa. 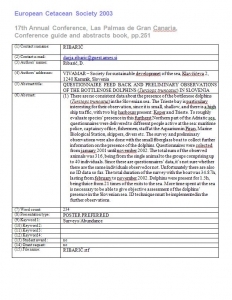 Data obtained from the field is duly processed and edited once we return back to the field station. Here, we process and file our pictures of the dolphins. The basic method of our research, as mentioned, is a photo identification method where our new photos are compared to a photo catalog. We compare the distinctive characteristics of each dolphin’s dorsal fin to older photos in the catalog to identify the individuals. A good quality picture is taken perpendicularly towards the dorsal fin and needs to show all of its features. A dorsal fin is the most exposed part of the dolphin and is entirely visible when the dolphin comes to the surface for breathing. It comprises of only soft tissue, without bone and cartilage, and its rear edge is substantially thinner than the front. As a result, the rear edge is relatively easily torn or nicked. There are often scratches, dents and scars resulting from interactions with other dolphins visible on the surface of the fin. The markings, shape of the fin, and  pigment patterns help us identify the animal. 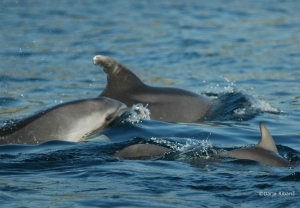 A unique dorsal fin helps us to identify individuals.

Photos of identified dolphins are compared with those from previous observations and from other locations to give us valuable information and insight about individual dolphins as well as the groups, their structures, and the variety of individuals that belong to them. Such data are linked to more information such as larger scale behavioral patterns between other locations in our research zone. Eventually, with careful analysis, we get a bigger picture of the dolphin distribution, frequency of encounters and presence of a particular group or subgroup. We are able to recognize the links/relations between individual dolphins and possible factors that influence them. With the implementation of long-term photo identification data over time, we can follow birth intervals of the offspring, a weaning period, eventually obtain information about the sex the dolphin, presence of any possible disease and /or unusual behavior, etc.

All of our conclusions based on research, observation and analysis confirm that the research area and “Aquatorium off Western Istria” is an important area for foraging, presence, breeding and reproduction of the common bottlenose dolphin as well as their (daily) migration. Further research and data analysis is essential for thorough and exact monitoring of a protected species in such an important area. If we are able to identify a higher percentage of individual dolphins and more details about their presence and migration/transition from one subpopulation to another, we will gain a more comprehensive insight into the dolphins’ sub-population dynamics, distribution and site affiliation in the area off Croatia. This information will contribute substantially to the implementation of appropriate measures for the protection and conservation of this species.

We hope that with time, the facts that we obtain and confirm about the dolphins here in the Adriatic will foster a more positive opinion in those who still doubt that bottlenose dolphins are a key factor indicating the healthy state of the sea. This ‘healthy sea’ that we are striving for is the final component of all the factors that concern our marine and coastal environment, and that in the end, we need as much as the dolphins do. The common bottlenose dolphins should be preserved, as it is also the only species left out of three species of dolphins that were present in the north-east Adriatic just a few decades ago.

To say it succinctly: Dolphins are Ambassadors of the Healthy Sea. 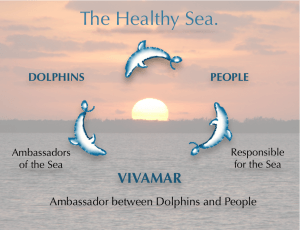 We are all inevitably linked.

Preserve the dolphins, ambassadors of the healthy sea!